In our last installment, we saw that the Cubs starting pitching was tops again in the NL Central. Now our journey through the division takes us to relievers. Relief pitchers are like punters in football- you only hear about them if they play poorly. Instead of including every single AAA pitcher who could potentially get called up and contribute, I'll be looking at each team's closer, set-up man/men, and another important arm.

Kerry Wood was given his walking papers this offseason, and his loss was Carlos Marmol's gain. Marmol was stellar in 2008, though perhaps overused. Regardless, he has electric stuff and already has closer experience, converting 7/9 save opportunities last season.

On the other end of the spectrum is Kevin Gregg, the presumptive set up man. He lacks the quality pitches that Marmol has at his disposal, getting by last year in part because of an extremely low BABIP. Marmol's BABIP was even lower, but his strikeout numbers are far more impressive. Gregg has a lower K rate and a higher walk rate. If that BABIP would adjust even slightly, the next guy in line could some time as set-up man.

The next guy in line is Jeff Samardzija, another hard thrower the Cubs have in their arsenal. The projections are not as optimistic as Cubs fans would like though. Still, he is a talent who may end up in the rotation before his career is through if he can develop his off speed pitches. Points Awarded: 6 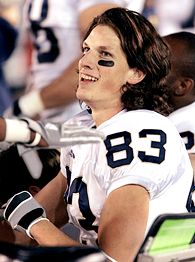 If the city of Chicago wasn't full of enough Golden Domers already, this guy will do his best to increase that number..

Valverde again led the NL in saves in 2008. An underrated closer who mixes a hard fastball with a split finger fastball he throws fairly regularly. He strikes out a high number while maintaining a strong BB rate as well. His contract runs out at the end of this season, and I wouldn't expect him to be back. Regardless, his successful recent past should continue on into the 2009 season.

Doug Brocail is an old man. An old man who had one of his best seasons last year, despite breaking down a little bit towards the end of the season. Two things should help ease his burdens: 1) LaTroy Hawkins being here for a full season 2) an improved rotation. Well, at least LaTroy will be here...If the second thing doesn't happen, at least we have...

Chris Sampson to take the ball in long relief situations. After off season surgery, Chris is easing into his spring routine. He is a pitch to contact guy with a remarkably high GB%. He doesn't strike a lot of guys out, but he doesn't walk many batters either. Just what the doctor ordered. Points Awarded: 5

Last season Milwaukee went out and spent 10 million dollars on Eric Gagne, thinking he'd be able to solidify the closing situation. Wrong. He's back though, on much cheaper terms this time. Closing this season is Trevor Hoffman, the long time Padre. The Brew Crew is in luck this time, as Hoffman should be outstanding once again in his 16th big league season. He may not strike as many guys out as he used to, but that changeup is still awesome and he doesn't walk a lot of guys either.

Carlos Villanueva is just a good relief pitcher. He throws four pitches, and keeps the ball on the ground. A nice K-rate and a superb K/BB ratio makes him an ideal member of a good bullpen. He can make spot starts if necessary as well.

On the other hand, you have David Riske. Not that he's a bad pitcher. Based on his numbers, he seems like a decent enough bullpen arm. What struck me was his incredibly high LD% (29%), and his near 1 K/BB ratio from last year. I guess there are worse pitchers in baseball. It was a close battle for third between StL and Brew City- I'll give Milwaukee the edge, ever soooo slightly.

Gone for good is former closer Jason Isringhausen, and in his place steps Chris Perez, a youngster who is a traditional fastball/slider guy. He came in and pitched pretty well to close out 2008, though he struggled with walks and blown saves (4 in 11 opportunities). If he wants to secure his role as the Red-Bird's closer, it'd be in his best interest to figure these issues out.

Ryan Franklin is a cagey veteran. I don't really know what cagey means, but I heard Jon Miller say it once. Franklin did save 17 games for the Cardinals last season but he also walks a ton of guys, gives up too many hits and can't compensate for those short comings with the ability to strike a guy out when he needs to. A former starting pitcher with Seattle, perhaps he would be better suited to be a long relief guy, as he can throw six pitches with some effectiveness.

Jason Motte is probably the best pitcher out of the three mentioned in this article. An older rookie at 26 last season, Motte pitched only 12 innings in the bigs. He projects well and has "closer stuff", a phrase that I hear commentators use with regularity. Perhaps what I'm most excited about is the potential for his own fan club at new Busch stadium utilizing the Mott's applesauce. Hopefully a creative individual can photcopy a bunch of applesauce labels and crudely/cutely slap an "e" between the last "t" and the "'s"...Points Awarded: 3 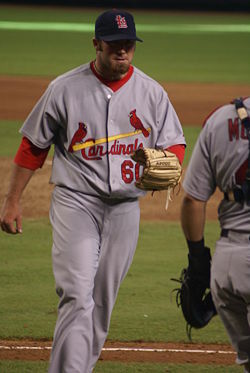 You totally thought I was gonna be the one to make the first Motte's Fan Club signs involving applesauce...nope, just a picture of the man himself

Limiting the home run is important for any relief pitcher, especially one in the Queen City. Francisco Cordero does that very well, and if he did nothing else of any distinction he'd still be a good fit for this club. A fine closer all in all. Maybe he is worth the $8.6 million he was paid in 2008! (He is not.)

I've looked through hundreds of player projections on Fan Graphs, and I've never seen the three player forecaster systems be this much in agreement on any one player. Looks like your classic veteran-who-doesn't-have-great-stuff-but-doesn't-walk-an-inordinate-amount-of-hitters-either type guy. Whew.

I'm a little stupefied right now. I wanted to lay into a member of the Reds bullpen, and I though Bill Bray would be one such candidate. Wrong. Young pitcher with pretty good peripheral stats. What's more, he has an even better potential fan club than does Jason Motte. Cincy-fan, you're on notice. And when novelty Mr. Bill Bray claymation t-shirts are on sale, I want my just compensation!! Points Awarded: 2. 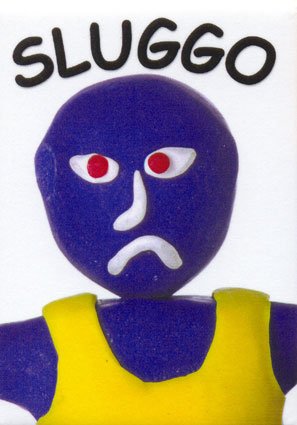 If I don't get royalties/credit for my Mr. Bill fan club idea, I' ll be as upset as this guy..

If you've been paying attention, you've noticed that I think relievers who have low BB rates are nice people to build a bullpen with. Matt Capps in one such pitcher Please, look at what I'm talking about. It's sorta sad though, in a way. Capps closing for the Pirates must feel the same way as Pauly Shore's awards-acceptance speech- it just doesn't get utilized all that often.

John Grabow and Tyler Yates are both average relief pitchers. Don't believe me? Here, and here. Nothing to write home about, and to be honest, nothing I wanted to write about. Instead, I'll conclude with this: 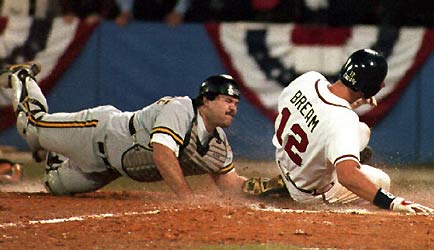 Sid Bream looked like he was running with a piano on his back from the moment he left second base. Still managed to score the winning run of the NLCS. Such is Pittsburgh Pirates baseball. Long live, Mazeroski!