The outfield Throwdown Series opens up with another interesting collection of players. One of the best offensive players in baseball made a positional switch to left field last season, which made him even more valuable.

After coming off a 2007 where Braun showed he had the stuff to be one of the games' elite performers, Braun had a bit of a sophomore slump. What was really maddening was his inconsistency. Month to month, his OPS was either very impressive or very pedestrian. His walk rate didn't improve enough from year one to year two, in my opinion, which will be something to look for going into 2009. With all that in mind, Bruan has the ability to become not only the best outfielder in the game (which he may already be), but one of the top three players in the game. He went from being a bad defensive third baseman to a very competent left fielder, especiallyin terms of making plays outside of his zone. That range in the outfield, combined with 15+ steals a season adds up to the best player in left field, and probably the second best non pitcher after Mr. Pujols. Points Awarded: 6 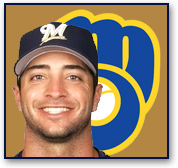 The winner of another tough call, this one involving the Astros left fielder and the Cubs' Alfonso Soriano, Carlos Lee is a much maligned player for someone who is as productive as he is. Many times we think of a player as being less valuable or worse than he really is based on his contract. Without a doubt, Lee is paid too much money to play for the Astros, but that shouldn't take away from his performance on the field. We know where Carlos won't help the Astros this year: on the basepaths and in the outfield. He's got lead feet, and his waistline seems to grow with every off season. His bat carries the day though. Striking out infrequently, and mashing a ton of home runs is a good way to become a very good offensive player, as Lee exemplifies. Points Awarded: 5

Having watched more Cubs games than I would like to admit to, I would like to think that my opinions of their players are more valid than of the other teams in the Central. With that in mind, it seems nearly ludicrous to me to say that Alfonso Soriano is a great defensive outfielder. True, the arm is there, and he is extremely aggressive and accurate throwing runners out/keeping runners from advancing. The rest of his defense- route taking, all around play and his instincts lead me to think that he's not the player a lot of people make him out to be. He crushes pitches without a doubt, and is a 20/20 man. A look at his EqBRR (equivalent base-running runs above replacment) , shows that he was a hinderance to the Cubs on the basepaths. So, we have a player who doesn't walk with any great frequency who bats lead-off. His manager causes him to lose some points, as he is not a "traditional" lead off hitter. Third in the division is my story, and I'm sticking to it. Points Awarded: 4

A steep decline in player value occurs after Soriano, which leaves us with a player who has never had a big league AB in the fourth position in our Throwdown. Rasmus is a highly touted prospect whose breakout year was supposed to be 2008. After failing to make the team out of spring training, injury and performance issues kept him AAA Memphis for the entire season. His cumulative split there, .251/.346/.396 is unimpressive, but he started off slow to start the season, then got injured at the midpoint. He has the ability to be a 20/20 player this year, but his lack of seasoning on the AAA level may hurt his chances to impact the Cardinals fully at the outset. Points Awarded: 3

As we tumble further down the list, our fall is halted by two players: Nyjer Morgan and Norris Hopper. Morgan wins out in this deul of mediocrity, based on age (two years younger than Hopper), and base running ability. A left handed hitter, he was able to parlay favorable matchups in his 2008 season into solid a .345 OBP. Since he won't be able to pick and choose his spots in 2009, expect that number to go down to around .300. He won't steal that many bases in all likelyhood, but his overall base running ability is good. In left field, he is an asset for sure. Points Awarded: 2

The Reds are expected to perform well in 2009, but any chance of their contending for a playoff spot depends on how much Hopper can help the team (or more realistically, how little he can hurt the team). He is the very definition of a replacement level player, the kind of guy who should be making trips up to the big league club as a fifth outfielder/late inning defensive replacement. With Hopper in left, and Willy Taveras in center, the Reds may be better than in 2008, but their weak spots stick out like sore thumbs. Points Awarded: 1