In the NL Central, Third Base is an interesting mix of mashers, young up and comers and a replacement level platoon (guess which one describes the Astros' third basemen?)

Consistency, thy name is Aramis. With Derrek Lee's power fading quickly, and Milton Bradley injury prone ways well known, Aramis Ramirez stands as the power bat in the middle of the Cubs lineup. Geovany Soto helps, but Ramirez should continue to be the steadying force in the middle of a potent lineup. An oddity of 2008 was that Ramirez struggled to hit left handed pitching, toting a line of .239/.333/.388.This looks to be more of a one year abberation, rather than a foreshadowing of things to come. 2006 looks to be his peak year, in terms of HR totals (38), but expect a ton of RBI and run opportunities. Points Awarded: 6

In 2007, Troy Glaus produced a very nice season for the Toronto Blue Jays. 20 HRs, an .839 OPS and decent defense resulted in him being worth 2.5 wins above a replacement level player. In the offseason, Glaus was traded to St. Louis for the Cardinals' third baseman, Scott Rolen. After a 2008 season that saw Rolen struggle with injury and Glaus play even better than he did in 2007, St. Louis clearly got the better end of the deal. He does nothing on the bases and is not a great hitter in terms of producing a high batting avearge, but his power numbers are stout, and he has the sort of patience and plate discipline that make him an ideal middle of the order hitter. Points Awarded: 5

Baseball Prospectus has Aramis Ramirez as a comparable player to Encarnacion. Those are kind words for Cincy's third sacker, since so far Encarnacion has failed to display the skills that have him highly touted going into the 2009 season. For starters, he has defensive lapses and poor range. He's nothing special, but does manage to collect decent power numbers, averaging over thirty doubles in his last three seasons. Unfortunately, his above average bat can only do so much to make up for his defense and base running shortcomings. Points Awarded: 4

Here begins the bottom half of our Third Base Throwdown. Key word: bottom. Bill Hall had a tremendous 2006 season that allowed him to ink a 4 yr/$24 million deal with the Brew Crew. After a season in CF, and one at 3B Hall has lost his ability to lay off the pitches out of the strike zone. Last year's .293 OBP was a result of the aforementioned lack of patience and an odd BABIP dip despite a high LD%. An adjustment in BABIP and a better approach at the plate should get Hall back to respectability, though not quite to the level where Milwaukee hoped he would reach. Points Awarded: 3

There's something about highly touted prospects that haven't found their way, that makes me sympathize with a team. Pittsburgh less than other teams, but still. After coming out of the Dodgers farm system with much (deserved) fanfare, LaRoche hasn't been able to harness that potential and turn it into big league success. Ramon Vazquez was signed over the offseason to assumedly hit against right handed pitching, and take some pressure off the young LaRoche. That being said, he has the sort of talent that is hard to hold down for long. His numbers should improve this season based on his having to face right handed pitchers less often, but getting more AB's on this level should also be a shot in the arm to his career. Points Awarded: 2

More affectionately known as Bloone's Farm, Geoff Blum and Aaron Boone have been given the job of holding down the hot corner for the 2009 Astros. As a switch hitter, Geoff Blum displays a fairly balanced split against both lefties and righties, though he isn't good at hitting either, to be honest. What is often overlooked with Blum is that he is a fairly adept defender even at 35 years of age. That will help to make this platoon appear a little more respectable. Despite that, Blum is past the point where he should be expected to make up an important part of a big league team.

The right handed hitting half of the Farm is Aaron Boone. Aaron bleepin' Boone, as he's known to Red Sox fans. That bit of October magic aside, Boone has actually hit better against right handed pitching than left handed pitching. Which is all well and good, except for the fact that Geoff Blum will be hitting against righties this season. So, there's that..did I mention that ALCS winning home-run yet? Oh, I did? Well what if I point out the fact that these two are just place holders, allowing up and coming prospect Chris Johnson to get some more AAA at bat's under his belt? Feel better, Astros fans? A little bitttttt??? That's a start. Points Awarded: 1 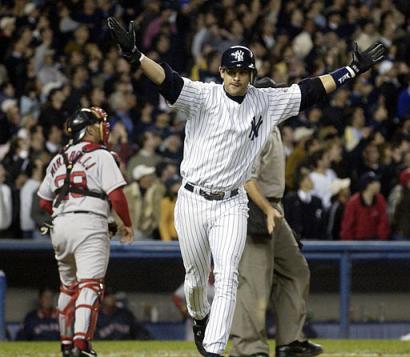