Second Base is a position that has changed quite a bit over the past decade-plus. Gone are the days where a slap happy, slick fielder is looked at as the prototypical second baseman. The NL Central could be looked as the exception to this rule, where outside of Brandon Phillips, the players on this list are more or less the traditional second baseman.

Like Pujols for the first sackers, Phillips is the clear cut favorite at second in my opinion. For starters, he's the only second baseman who has a chance to hit 20 HRs this season. The best range by a good measure further strengthens his case as the best in the NL Central. One aspect to take note of with Phillips is that he has been getting progressively worse on the basepaths since 2006. Attempting to steal judiciously is an important aspect of being a positive contributor in this regard, and with Dusty Baker as his manager, it remains to be seen if he can continue being the terror he once was on the basepaths. Still, 20/20 is a ratio that very few players can manage to achieve, and Phillips is one. Points Awarded: 6 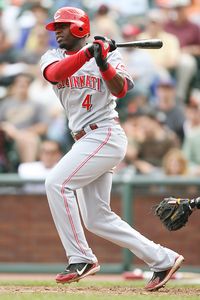 Mr. Weeks is a curious player, to say the least. A long time favorite of the sabermetric community, Weeks has failed to put together a full season's worth of success since becoming a full time major leaguer. Last season the Brewers were forced to bring in Ray Durham as a platoon-mate for Weeks. While he's batting average has remained constant (.235 in 2007, .234 in 2008), his power and onbase numbers declined a great deal. His SB% was tremendous in 2007, after tailing off to merely above average in 2008. As long as he continues to make excellent contact, and limit his swings at balls outside the strikezone Weeks will remain a projector's darling for the next few seasons. Points Awarded: 5

Lost in the shuffle of the Cubs' monster offense is Mike Fontenot. The Cubs lineup is sort of backwards, in terms of on base percentage. If your high OBP guys are supposed to be at the top, Sweet Lou has it all wrong, with Milton Bradley (.402 projected OBP), Geovany Soto (.370), Fontenot (.356) and Kosuke Fukudome (.386) hitting at the bottom of the lineup. Fontenot's number surprised me a little when I gave them a closer inspection. He doesn't have the plate discipline of Rickie Weeks, as far as swinging at pitches outside the strike zone is concerned, but still manages to get on base with at a nice clip. He basically won't wow you with great speed, power, or base stealing abilities, but he's a classic contact hitter whose aformentioned OBP skills make him a perfect cog in the Cubs offensive machine. Points Awarded: 4

Now we begin to see the players who could be lumped in with the traditional second baseman of years past. Sanchez is just such a player- he has the high batting average that look good on the back of a baseball card. Behind the batting average is a low OBP and even less power. Where he is different from a traditional second baseman is that he doesn't steal bases. Every first baseman is projected to at least tie Sanchez in stolen bases. What saves him is a consistently high LD%, and decent plate discipline. He also plays just about everyday, which is a big reason why he's ranked fourth on this list...Points Awarded: 3

If Matsui and Sanchez played the same number of games, in the same ball parks, I reckon their stat lines would resemble each others more than any two other players we'll see in these comparisons. The biggest differences are Matsui's higher number of stolen bases, and his lower batting average. He's worth nearly a win more per season than Sanchez because he's great on the basepaths, and is a better defensive player as well. Can he stay on the field for 140 games this season? If not, Drew Sutton may get his long awaited shot to show what he can do in the majors. Points Awarded: 2

As of now, Baseball Prospectus has Schumaker as first in line at second base for the Cards, with Joe Thurston and Brendan Ryan. So far, the experiment in moving Skip from LF to 2B hasn't been a smooth one. This may be one of the more interesting developments in the NL Central this season. Schumaker moving to second isn't so much about his development as an infielder, as it is about clearing out a spot for stud prospect Colby Rasmus. Schumaker has the second base skills of a high contact rate, and fairly good OBP, a very solid BB/K ratio. Still, his potentially poor defense at one of the most difficult positions on the infield, coupled with his inability to compensate for his shortcomings on the bases dooms him to last place in The Throwdown. Points Awarded: 1