Presumptive #2 Starter Wandy Rodriguez toes the rubber today against starting pither Shawn Hill and the Washington Nationals. This is already our second game against Washington this spring. 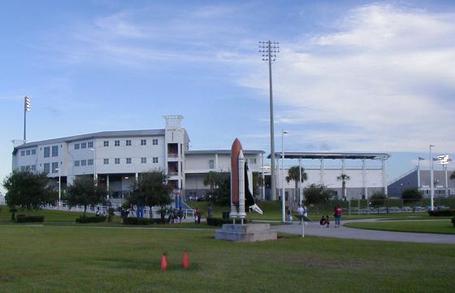 The loser of today's game will be jettisoned into space.

Justice gives takes note of our minor leaguers who are on the precipice of making the big leagues. Specifically, Drew Sutton and Chris Johnson are mentioned. RJ got a couple interesting quotes from Tal Smith and Cecil Cooper. In regard to our youngsters, Smith said:

"We’re not going to wait until a guy turns 28 to give him a chance."

Ok, ok. Sounds good. But, I mean, a lot of our guys are already inching up towards that mark anyways. Edwin Maysonet is 27! What's more, Smith isn't our manager, maybe he doesn't feel the same way. Especially with a guy like Chris Johnson who has shown promise, but who's held back by the veteran platoon of Blum/Boone at third base. Cooper, to his credit, didn't outrightly disregard the performance of Johnson, saying:

"I’m not going to rule him out. The kid has tremendous ability."

He may just be paying lip service to the issue, opting to give Johnson a sliver of hope in order to prolong his good play. A crafty manager's trick, perhaps. If not, if he truly is giving every player, old or young, a chance to win a job, then he can be applauded.