The Atlanta Braves' lack of success in 2008 was due in no small part to the frustrating seasons of starting pitchers Mike Hampton and Tom Glavine. Hampton was placed on the DL April 3, 2008 with a strained pectoral muscle. This was after missing all of 2006 and 2007 while recovering from two elbow surgeries. His 2008 campaign wasn't a total loss though, with Hampton returning to the mound on July 26. He would start a total of 13 games for the Braves to close out the season.

The future Hall of Famer Tom Glavine signed with the Braves before the 2008 season and was expected to be a steadying force behind a resurgent Braves rotation. Unfortunately for Atlanta, that wasn't the case, as Glavine had his own stint on the DL starting June 10. What was termed a left elbow strain at the time eventually was diagnosed as a torn flexor tendon. Surgery was necessary to repair the injury after a cameo start in August.

For Mike Hampton, it isn't possible to identify a decline in velocity, or a fluctuation in his release point as to when exactly he was injured. He wasn't able to start the season and only got into a game after he was healthy in July. I chose to take a look at two starts he made at the end of 2008, both against the Philadelphia Phillies, to see if there were any noticeable differences between his approach. His first start was on July 26th (a loss), while his second was September 18th (a win).

Hampton had the misfortune to make his first start of the season against a Philadelphia team that had one of the more potent offenses in MLB. Not only was it his first time on a major league mound that season, but it was his first action since 2005. Nerves, rustiness, and a tentative approach all added up to a less than stellar line of: 4 IP, 8 H, 6 ER, 2 BB, 1 K. On September 18, he was able to perform much better, as his line from that day, 7 IP, 6 H, 2 ER, 2BB, 1 K, would indicate.

What are the key differences between the two starts? For starters, Hampton nibbled on the corners of the strike zone much more in Start 1. This may speak to his unwillingness to throw strikes, due to a lack of command or confidence in his pitches. Regardless, he was able to consistently throw his fast ball for a strike in Start 2 increasing his ability to get ahead of hitters. His fast ball had slightly less vertical movement in his first start, which means that the pitch had less downward movement on it, and is therefore left higher in the hitting zone. It is my understanding that there is more backspin put on a ball with less vertical movement down, which causes the pitch to stay up in the hitting zone longer. 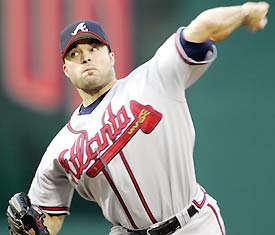 One fairly dramatic change in philosophy from Start 1 to Start 2 occurred with pitch selection. Hampton threw only six sliders in his first start, instead using his slider, curveball and cutter with greater frequency. Start 2 saw him utilize his changeup almost as many times (16), as his other three off speed pitches combined (20). With a lesser vertical break on the pitch in Start 2, he was able to keep it lower in the hitting zone, while the greater horizontal movement indicates it moved away from right handed hitters and more in to lefties.

Most importantly for Hampton was that from Start 1 to Start 2, his five pitches' velocity was basically the exact same. This is important for a pitcher coming off the kind of arm injuries he was, since variations in pitch speed is a good indicator of an injury. His time to plate for all of his pitches was faster in Start 2 as compared to Start 1. As for his release point, the horizontal point was a tad lower in Start 1 than Start 2. If the values had been reversed, and Hampton started at a higher release point and finished lower, there would be more cause for concern. Certainly though, it seems that Hampton is as healthy as he's been in the past four seasons.

Tom Glavine's 2008 season was the reverse of Hampton's. While Hampton was able to start the season as scheduled, he injured himself after only 12 starts. His solitary start in August meant that he and Hampton both would start 13 games last season.

The starts of Glavine's which I selected were his last two before he hit the DL: a June 4th outing which saw Tom collect a no decision while pitching 5 solid innings. He allowed two runs on six hits while striking out five. Start 2 on June 10th did not yield a great line: 3 IP, 6 H, 4 ER, 4 BB, 0 K. He left before the bottom of the fourth could begin, the pain in his elbow felling the veteran essentially for the entire season. 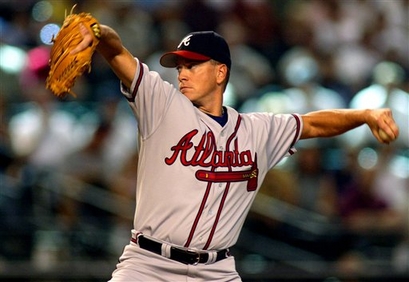 So, Start 1 vs. Start 2, what can we tell from each start that may have been the result of the elbow injury? Start 1 saw Glavine's lowest pitch speed clocked at around 72 MPH. Just six days later, his velocity dipped down all the way to 62 MPH on certain pitches. The average velocity that he threw his change up and fast ball was actually faster in Start 2 though, so I'm not sure if the reduced speed on a few pitches could tell us anything about an impending injury. He was only able to pitch three innings in Start 2 though, perhaps as a result of elbow pain/tiredness after attempting to overthrow?

Vertical break is factor number #2 to investigate when looking at an injured pitcher, but here too, Glavine doesn't exhibit the sort of change from Start 1 to Start 2 that would indicate that he was pitching hurt. His fastball had only slightly higher average vertical break from Start 1 to Start 2, meaning that the backspin on that pitch left the ball slightly higher in the zone. His changeup's movement, both vertical and horizontal was significantly different from Start 1 to Start 2, however. When Glavine pitched well, his changeup stayed higher in the zone and broke away from righties and into lefties. His pre-DL start saw the pitch arive at homeplate lower in the hitting zone, and stay more towards the strike zone in terms of horizontal break.

The biggest difference I could find with his pitches was that he threw his change up in Start 1 at a rate of nearly 60%. Start 2 saw him throw considerably more fastballs in proportion to total pitches thrown. A stark difference like this could indicate that something with Glavine was not right. His release point was on avearge nearly a foot lower in Start 1 as compared to Start 2, which could mean that his was releasing the ball lower to alleviate the amount pressure put on his elbow from the higher arm slot. I'm not sure how exact the Pitch F/X release point data is, but it's fairly safe to say that when a pitcher varies his release point from one start to the next that dramatically something is probably wrong.

The off-season saw the Braves and Hampton part ways, allowing the former Astro to make a return to Houston. An incentive laden contract gave the Astros the luxury of bringing Hampton back into the fold, without investing too much money in him. Atlanta penned Glavine to a similar contract this past week. With incentives, the deal could be worth $4.5 million. While these two pitchers will no longer be teammates, they both seek the same thing: a healthy and successful 2009 season.