Alex Rodriguez, on his use of PED's: "It was really amateur hour"

Share All sharing options for: Alex Rodriguez, on his use of PED's: "It was really amateur hour"

"It was really amateur hour. I mean, it was two guys," Rodriguez said. "We couldn’t ask anyone. We didn’t want to ask anyone."

A-Rod's entire persona seemed as contrived as ever.

Pardon me, but I seem to recall a time when the above bolded phrase was used by legendary anchorman Ron Burgundy to reference something a little more serious than a ball-player using a banned substance. 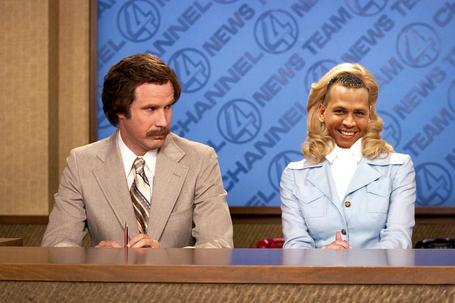 PED's may have taken over the game of baseball for nearly a decade, but when a woman tries to take over the news, well that's just going too far. Amateur hour, indeed.

If you thought A-Rod was mad at the Sports Illustrated reporter..