Share All sharing options for: Pondering the Astros All Decade (All-Aughts?) Team

There are few things that matter less than constructing an all decade team.  There are a also few things to write about the Astros.  Rock, meet hard place.  This where I feel like I am in terms of writing things about the Astros this week. Thankfully for me (and by proxy, you...I hope) the closing of the Aughts(?) allows for speculation about who should make the Astros All-Aughts team (this is my article and I like the term aughts the best.)

HLP and I started going over the possibilities earlier in the week and realized one thing: this decade cannot be figured out easily.  For one thing, there wasn't a lot of stability for us throughout the decade.  Secondly, Lance Berkman played too many positions during the decade.  So we could legitimately just fill in Lance Berkman at CF, LF, and 1B. But what about Jeff Bagwell at 1B? Or Carlos Lee in LF? Is Lance really going to be the CF of the decade or should Hidalgo?

For example, the first base conundrum works out like this: In years in which they were the primary first basemen for the Astros in the Aughts, Bagwell totaled 18.8 WAR and Berkman totaled 18.9.  If I were to weight Berkman's WAR by the percentage of games he played 1B in the decade and give Bagwell back his .5 WAR from 2005, Bagwell would edge out Berkman 19.3 WAR to 16.03 WAR. 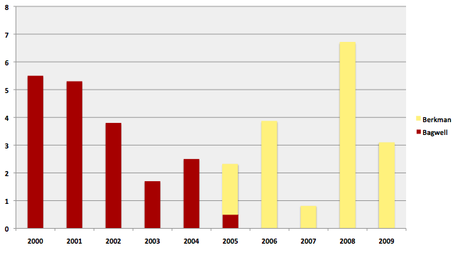 But is that fair? Sure, I've weighted Berkman's WAR by games played, but that's a crude weighting.  Correcting that way for every position for every year could work, but it does it answer the question that we as fans want answered?

To me, it doesn't.  I look at that WAR graph and the numbers that construct it and still can't shake the feeling that to me, Lance Berkman is the 1B of the decade.

But this really isn't something that I should just opine on solo because we have each other. I mean, do you really want me to chart the weighted WAR of Richard Hidalgo, Lance Berkman, and Willy Taveras in CF? My guess—nay hope—is no. I'm sure for that amongst ourselves, we can decide on an All-Aughts team comprised of the following positions (my votes in parenthesis):

What say you? Let's take the next few days to hash this out in the comments section and once some sort of consensus is reached, I'll post the results and figure out what kind of win totals that team would have posted in a single season.