The Houston Astros gave closer Brandon Lyon a 15 million, three-year contract last week, luring him away from the Detroit Tigers and beating out the Philadelphia Phillies for his services. Lyon threw 78 2/3 innings in his only season in Detroit with a 2.86 ERA, 57 strikeouts, 31 walks, seven home runs and an ERA+ of 161. His BABiP of .231 last season showed he was incredibly lucky to post that low an ERA and probably will fall back to earth some in 2010.

However, the goal of this post isn't to predict how Lyon will perform next season for the Astros. That can be saved for later in the offseason. I thought we could delve into the Pitch f/x data on Lyon to get to know him a little better.

First off, what does the 29-year old throw? Lyon has a four-pitch arsenal, including a four-seam fastball, a cut fastball, a slider and a sweeping slow curve*. Lyon throws his fastball about half the time, as most relievers do, but works in the curve next and the slider/cutter combo whenever he needs a sharp breaking pitch.

* These pitch types are defined by the Pitch f/x system, which has been known to misidentify pitches here and there. For the purposes of this, I've accepted this as random noise.

The chart below shows how fast Lyon threw last season, how often he threw a specific pitch on the first pitch of an at-bat and how often in general he threw it.

As you can see, Lyon hardly ever goes to his changeup and only threw 14 all season. His main off-speed pitch is the curveball and he uses that accordingly. It's a little surprising that he chose to throw it more as a first pitch than overall. This may be a case of the pitching coach telling him to keep guys from sitting on his fastball or simply Lyon needing to set a batter up with something slower first.

Here's another chart showing the percentage of times he threw each pitch for a strikeout and the speed of those pitches. As you can see, the speed on his fastball and curve ticked up just a bit for that third strike. However, with this small a sample, I'm not ready to draw anything from that. It's just cool to note.

Lyon did record his second-highest career swing-through percentage, getting 16% of his strikes swinging. This may explain the drop in his contact percentage to 79% in 2009, down from 83% in his career. His first strike percentage also dipped below 60 percent for only the second time in his career. I'd imagine this could be linked to him throwing more first-pitch curves.

I'm not sure if Jim Leyland just never developed any trust with Lyon after a few early-season blowups, but his average leverage index was also the lowest of his career, as Lyon was used more times in low leverage situatiosn (26) than in high (21) and came in 39 times with the bases empty. Lyon also pitched 25 multi-inning games, which was 36 percent of his career total and more than he'd pitched in the previous four seasons combined.

But, again, that's all information you can see on Baseball-Reference.com. What about his actual pitches? How do they move, is his slider for real, what's going on there? Let's attempt to answer some of those questions. 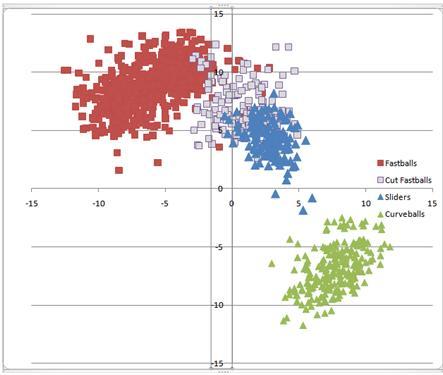 Most of his fastballs tail in on the hands of batters and don't have much downward break. The cutter tends to stay pretty straight on a left and right break, sometimes shading away from hitters and sometimes shading back in. It actually looks like a slider, fitting in nicely with that slider group. The curveball breaks down and away from hitters, meaning it could be a nice pitch against free swinging right-handers, but also means the catcher better get used to blocking balls in the dirt.

The graph above measured a pitch's break in terms of where it crosses the plate. This next graph attempts to show the angle of break on a pitch and how much it deviates or 'bends' from a straight line from the pitcher's hand to the catcher's mitt. 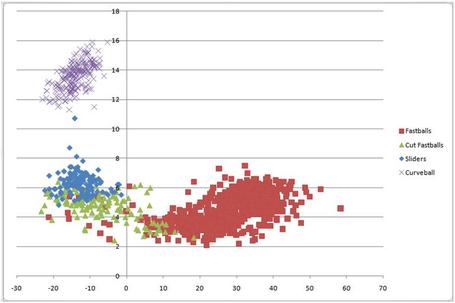 See how similar the cutter and the slider are in angle and length of break? Both pitches break away from right-handers with the slider having slightly more bend to it. This made me think the two pitches were possibly just misidentified and that the 'cutters' were just sliders thrown a little harder. Not so. I checked the spin data for both pitches and the slider has both a slightly slower average spin rate and a different average spin direction.

Lyon's curveball has some serious bend to it and definitely works as his change of speed pitch, both in movement and location. His fastball again can be seen breaking in on right-handed batters, which could help explain his 1.38 groundout/air out ratio last season. All those fastballs tailing in on a batter's hands lead to more ground balls and thus, more double plays.

Here's a take from Bless You Boys:

Lyon was the Tigers’ best reliever this season. It took a while for fans to warm up to him after some bad outings to begin the year, but by the mid-point of the season, Lyon was the eighth inning set-up man, and probably the one late reliever Jim Leyland trusted to pitch more than one inning when necessary.

From all accounts, the cut fastball made the major difference in his game. As David points out in this post, the pitch allowed him to get right-handed batters out with far more regularity.

Had he not been priced out of the Tigers’ preference for a closer (both in terms of money and years on a contract), I believe Lyon would’ve been the team’s top choice as their ninth-inning man next season.

So, that's what you get. Hopefully, this will prepare you a little better when you watch Lyon next season. At some point, we'll take a look at his upcoming season through projections and history at MMP.