The Astros most impressive performances in 2009: The relievers

Share All sharing options for: The Astros most impressive performances in 2009: The relievers

Why are we fretting so much about Jose Valverde and LaTroy Hawkins? I mean aside from the fact that they're talented pitchers with above average ability.  Closers, and the set-up men whose shoulders they stand on, enter games in situations where we as fans have our stomach in knots.  In someone like Valverde's case, he toes the rubber and pumps 97 MPH fastballs while mixing in, most of the time, a devastating split-finger pitch.

With starters, each at bat doesn't have the feeling of importance that a closer's does.  A starter always has another inning or two to work with, and there are still plenty outs for the offense to work with, too.  But relievers are leveraged.

This was an awkward day of Hawkins.  Valverde was working himself back into the job that Hawkins had dutifully filled for him in his extended DL stay.  So, I guess it's understandable that Hawkins starts on of his final 9th inning save opportunities a little shaky. 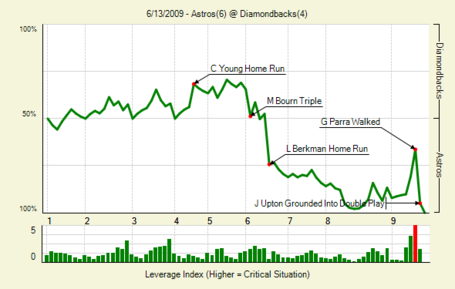 With the Astros leading 6-4, Hakwins quickly found himself with runners on first and second and none out.  Hawkins rebounded with a GIDP on Justin Upton that netted him an astounding .293 WPA on a single PA due to a leverage index of 5.91 (a run at that point would have been like Jon Garland giving up 5.91 runs to start the top of the first, or half a Jason Jennings here or here).

Cecil Cooper trots out Tim Brydak to start the bottom of the seventh.  Two batters latter, Cecil Cooper brings in Jeff Fulchino to clean up a bases loaded, no outs jam.  Yes, Fulchino gives up two runs, but the situation had an RE of 2.30, so technically Fulchino saves our butts, because the third run puts the Pirates in the drivers seat. 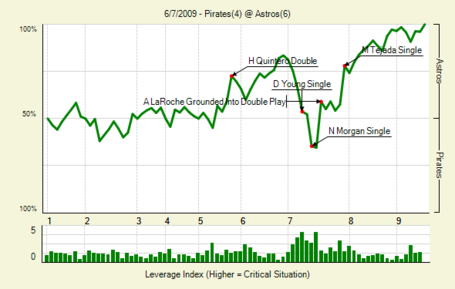 Finally, though, Fulchino is on the receiving end of an Adam LaRoche double play and the inning is over.  For his trouble, Fulchino is credited with .245 WPA, and has the satisfaction of knowing that he had the second most leveraged out of the year.

No. 3 Jose Valverde on September 29th

Some of us may not remember this one because, well, the Astros were depressing to watch at this point.  However, there was still some excitement to experience. 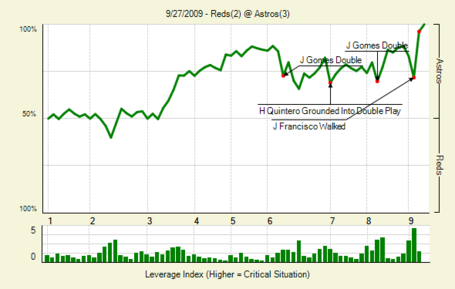 The story is pretty similar to the above.  Valverde got himself in trouble to start the inning, but rallied to get out.Yet again, another double play ball, netting him .236 WPA on the GIDP of Laynce Nix. This begs the question, do the pitchers get the credit or does the defense? Or does it matter because all we're looking for are spectacular moments in relief pitching?

Like yesterday, what are the moments I missed because I did this by the numbers? Only, no poll because having to actually read the article to vote didn't mesh well with getting a lot of responses.