The Astros most impressive performances in 2009: The hitters

Share All sharing options for: The Astros most impressive performances in 2009: The hitters

This idea struck sometime in late August as I was watching, most likely, another Astros loss. I thought it would be a good idea so I randomly threw it onto Things for today.

The idea is pretty simple, what were the top three greatest performances that players put up during the season. Because I'm saber-slanted, I'm using WPA to quantify greatest. I've spent all morning clicking through every player's play log to find their highest WPA/play in order come up with the top three in hitting and pitching. Today is about the hitters, and the results will likely surprise you.

The man on the mound, a familiar Brad Lidge. The situation, down one in the bottom of the ninth, the bases juiced with two outs. What does Kaz do? He lines a 1B right field scoring JR Towles and Jason Michaels—the tying and the winning runs. 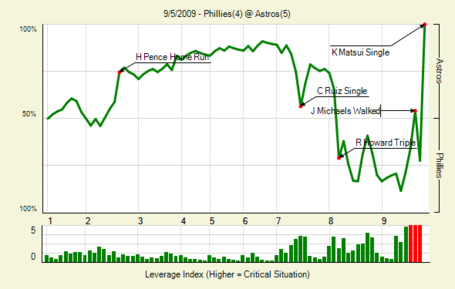 Kazuo Matsui picks up a tidy .734 WPA on that one play. That's staggering. Of course, he's aided by the fact that the leverage situation was an insane 10.78, but he came through. That graph is ridiculous. Congrats, Kaz.

No. 2 - Miguel Tejada on September 9th

Compared to Kaz's ridiculous three-quarters of a win performance just four days earlier, Tejada's performance feels a little pedestrian. The real trajedy of this day, is that Lance Berkman gets squeaked out of the top three, even though were it not for him, Tejada doesn't make the list.

After Lance doubled to put runners at 2B and 3B, the Braves IBBed Carlos Lee to bring up Tejada, with one out (this reads like a terrible decision until you remember that it's Miguel "GIDP" Tejada at the plate). The result is that Tejada sends a ground ball to CF bringing in Kaz Matusi and Berkman to put the Astros on top 2-1. 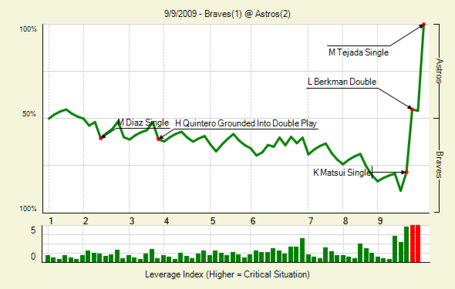 Tejada walks away with .471 WPA for his troubles and the number two performance.

Top of the ninth. None on and two out. Astros tied 3-3 with the St. Louis Cardinals. Keppinger takes Kyle McClellan deep for a HR to put the Astros on top. 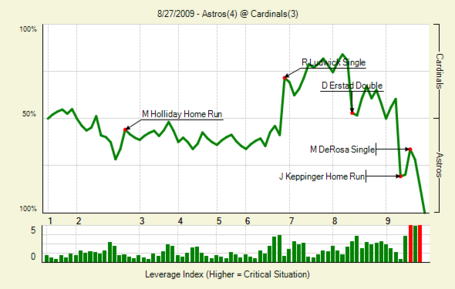 Incidentally, Keppinger garners .421 WPA with the HR, but most importantly: Keppinger earns the highest isolated WPA performance of the season.

Keppinger's swing was just involved he and McClellan, where as Kaz and Miggy had the table set for them. I'm not saying that because they had their situations created by the play of players in front of them that they don't deserve credit for coming through with "clutch" hits, but with Keppinger, you don't have to wonder if more credit should be shifted to the table setters.