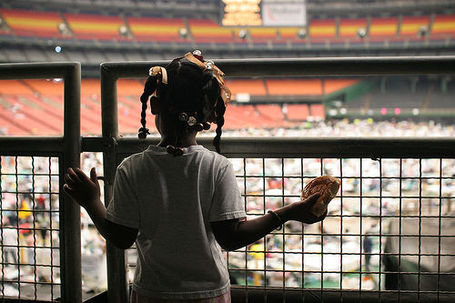 This isn't going to be the longest or deepest post I'll write, but it's something that's been on my mind lately. Last week, I was walking into Reliant Stadium, right past the Astrodome. Seeing the grassy parts leading up to the stadium reminded me of all the good memories I had in that place.

See, I may be like many others in that my family used to go to Astroworld or the Rodeo and sit up on those grassy hills to eat lunch. It was a little thing, but a good memory.

And that's the thing that gets me about the Astrodome, as it sits there, useless. It has so many good, warm memories for me that I can't help but feel sad to see it empty now.

The picture to the right appears to be from the Katrina evacuation, but I chose it for a different reason. I remember being a kid, standing at those rails and looking out at the field. I'm one of the worst about getting down on the Astros, either their roster, their management or their play. I'm ever so slightly jaded now, which is not something kids know about. That's what movies like Field of Dreams are about, right? Reminiscing about a simpler time...

For some reason, though, the Astrodome hasn't stuck in the city's consciousness like, say, the Superdome has. My wife has researched and written a paper about the Superdome and it's relationship with the citizens of New Orleans, especially pre- and post-Katrina. After it was damaged in the hurricane, there could have been the impetus to tear it down and start over, but there wasn't. It stuck in people's minds, so much so that it's part of the city's persona. It was described as a giant pimple when it was built, but now, it's considered a jewel of the city. 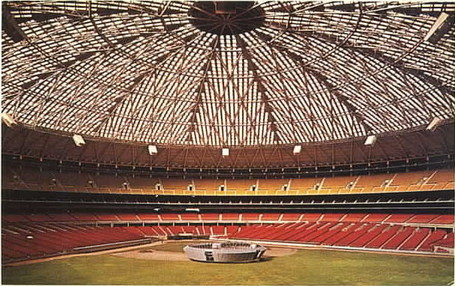 My two favorite memories of the 'Dome, in no particular order. First, there was a game against Colorado in the mid-90's. Dante Bichette was playing left field and we were sitting out in the bleachers. This guy in our section was all over Bichette, razzing him, leaning over the rail to yell at him. Bichette didn't react at first, but then he started playing to the crowd. He flexed his muscles, he played like he pulled out his wallet and counted his money. The crowd went crazy yelling at him, but it was just a great moment.

Second was during the 1999 pennant race. In September, the Astros were playing the Reds in a crucial game. We knew the 'Dome was closing, so we got seats on field level down the first base line. Darryl Ward hit a home run down the first base line that just cleared the foul pole to give the Astros the game. It was such a great moment, I'll never forget how awesome it was.