All time Astro flops and the "Texas Effect"

Share All sharing options for: All time Astro flops and the "Texas Effect"

Brian McTaggart in his blog wrote about his five biggest flops in the Astros' history. All these guys were brought in during the same eras- Doug Drabek and Greg Swindell during the early-mid 1990s, while Jason Jennings, Woody Williams and Preston Wilson were Tim Purpura moves from the seasons following our World Series year.

One thing that binds four of these five guys is that Swindell, Williams, Drabek and Jennings are all Texans. This is a fact that I'm sure was not lost on the Astros front office people when bringing them into the fold. While each player was in a different phase of their respective careers, their hailing from the Lone Star State was a factor in their becoming Astros. Jennings is the extreme example of this, when after his disastrous 2007 season, his true hometown team, the Texas Rangers, signed him to a free agent deal...when he promptly got hurt and missed the majority of the 2008 season.

The current roster is littered with Texans- from Lance Berkman and Hunter Pence to JR Towles and Chris Sampson. We saw this trend continue to the 2008 draft, when  Second Baptist's Ross Seaton was selected. The Astros are an organization that seems to bring in home grown playes at a fairly high rate. It could just be the fact that Texas is state where there is a great deal of talent to choose from. Or perhaps front office people realize that "Once a Texan, always a Texan" and that the Astros can get consideration from players they otherwise probably would not receive. Roger Clemens and Andy Pettitte are two, albeit unique, examples of this. It's not very frequent that you see players of their caliber leave the top team in any given league, to play for a team that is merely respectable. 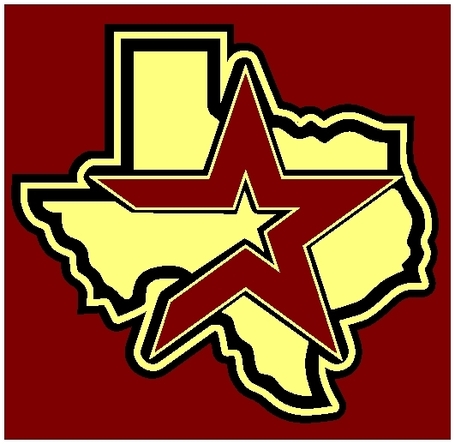 Whatever the correlation, it seems that the consequences have on the whole positive, rather than negative. True, the aforementioned flops should make you think twice before getting too excited about a Texan coming in to play for the Astros. On the whole, considering that the "Texan" discount allowed the Astros to do things like bring in Clemens and Pettitte, re-sign Craig Biggio in 1995 when he could've sprung for greener pastures, and do the same for Lance Berkman when his contract was up in 2004, I see the Texas effect as being a good thing for this organization. From the players we draft, to the desire of free agents/trade eligible players to be willing and excited to play for the Astros, it seems to be a blessing, rather than a burden to have a major selling point be the state in which the player resides.