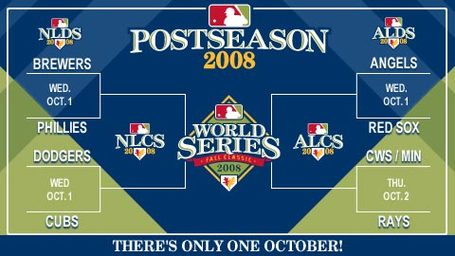 I'm hoping the Twins win.  I still have a sour taste in my mouth about the 2005 World Series, so lets just say I won't be rooting for the White Sox anytime soon.

I'm not a fan of the AL and really don't follow it too much... but I like the Rays(mainly because they are in their 1st winning season in their 10 year history) so I will definitely be rooting for them.

On the NL side...  I guess I'm rooting for the Brewers.  I don't think the Brewers are the best team and I think they will be eliminated in the 1st round(Sheets and his "broken arm" is just too much of a blow to overcome... even with Sabathia).

And on to my meaningless predictions.

AL Side
Red Sox and Rays advance to the 2nd round with the Red Sox advancing.  Just a gut feeling... I don't think this year is as magical for the Rays as it has been so far and I think the Red Sox will overtake them... I hope I am wrong.

World Series
Phillies vs Red Sox... I hate to say it, but I think the Red Sox will win yet again...  and I think they will do it in about 5 games.