Share All sharing options for: Houston Astros - Last Game in 2008

The last game of the season...  This game means verly little to the Astros(other than playing the game the way it should be played)...  A win today and the Astros will have solidified themselves as 10th or 11th place team in the overall MLB standings(depending on what the White Sox do) and a loss today can put the Astros as bad as 13th in the overall standings, which means that they have the potential to lose their 1st round draft picks depending on what free agents they sign in the off season.  If you want to put some meaning into todays game, you could note that the Astros winning today, would keep them in 3rd place in the NL Central... a loss by the Astros and a win by the Cardinals, and the Astros would be in 4th place(in the W column).

In the NL Wild Card, both the Brewers and Mets have identical 89-72 records with one game left each.

Today will be a sad day for some as Astros long time catcher Brad Ausmus retires from the team.  He's not sure if he will be playing baseball again next season, but he's sure it won't be with the Astros.  If he does play next season, it will be closer to his home in California.

Ausmus being on the team has meant a lot to Roy Oswalt, who showed his appreciation to his friend with a nice (and very thoughtful) gift.

On Friday, Oswalt presented Ausmus with a watch, engraved with the number of Oswalt's pitches Ausmus caught since Oswalt broke into the league in '01. Also engraved was Oswalt's record with Ausmus behind the plate, and the words, "Thank You."

The number of pitches: 19,284. The record, based on games that both Oswalt and Ausmus started together: 99-47.

"A lot of people think pitching only works one way," Oswalt said. "[A good catcher] can make your pitching so much better.

"Any time you've got somebody who understands you every night when you're out there, you want to show a sign of appreciation."

Ausmus was moved by the gesture.

"I think it's awesome," he said. "It's not easy for me to be touched, but I was touched last night when he wanted to shake my hand on the field, and I was even more touched when he gave me this watch. With the engraving, it's something that I'll keep forever and always look back on the years I played with him."

Cooper is set to give Ausmus an opportunity to receive the thanks from the Astros fans that he deserves.

If manager Cecil Cooper sees an opportunity late in the game to remove Ausmus before the game is over, which would give the fans a concrete final moment to cheer the catcher, he'll do so.

"I did tell him, depending on the situation in the game, if it's the sixth or fifth and he starts -- get him out and get an ovation," Cooper said. "If there's a way to do that, I want to do that." 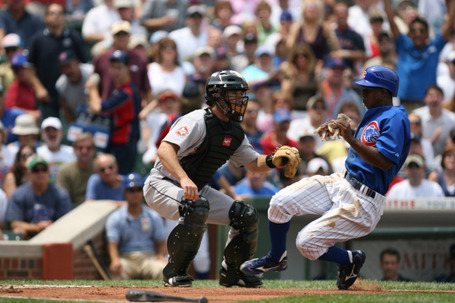