Just got out of exam number four and came across this annoucement from the Astros. Matt Kata has signed on to a minor league contract, and more importantly can lay claim to the always coveted "non-roster spring training invitee" label. Kata, 30, has 645 ABs in his four major league seasons. He's in the running to back up Miguel Tejada, along with minor leaguers Tommy Manzella, Edward Maysonet and TCB favorite Drew Sutton. 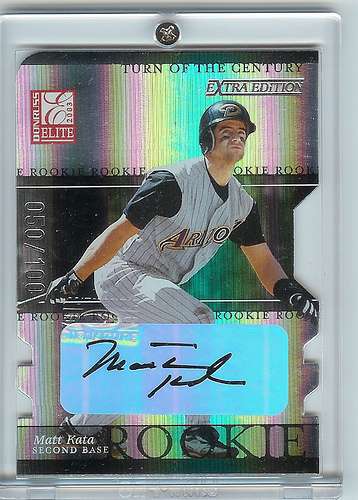 You may get to know me pretty soon...."may" being the operative word

Richard Justice blogged on a number of topics today. The main points:

I do tend to agree with Justice's points this time around. The market for closers is dicey right now, so holding on to Valverde is probably wise. Look at what the Rockies are doing with the recently acquired Huston Street. It seems as if their plan is to keep him around until his value sky rockets at the trade deadline next July. Even so, Valverde is coming off a second straight season of leading the NL in saves, and Street didn't finish 2008 as the A's closer. Still- when Francisco Rodriguez, coming off the greatest save season in history, can't get a deal right off the bat, the market just isn't there.

It seems more and more likely that Wigginton is going to be traded. Teams in both leagues (Cleveland and Los Angeles come to mind immediately) need a third baseman for 2009, and coming off a solid year, Wigginton seems like a perfect candiate to get shipped away. Combine his 2008 performance with Drayton's payroll desires and a perfect storm seems to be brewing.

As far as waiting to sign a FA until later, I think RJ may be on to something. With teams less and less willing to offer big money contracts early on in the off season, perhaps more players will wait it out until 2009 to sign. Who knows what will happen if a player decides to hold off on signing until February. When their hands are forced they may sign with a team for a lower number than they would have hoped for.

If we need Brad James and Bud Norris to ride in on a couple of white horses to save our bacon, we're in for a long 2009. These two don't seem to be top of the line pitchers. Both have had control issues in the past (as recently as the AFL). Neither have pitched in AAA, not to mention the majors. Felipe Paulino or Alberto Arias should be counted on, in my opinion, more so than either James or Norris. Although  Norris was named to the AFL Top Prospects Team.