Brian Bogusevic, Chris Johnson and Bud Norris make their marks in the AFL

Share All sharing options for: Brian Bogusevic, Chris Johnson and Bud Norris make their marks in the AFL 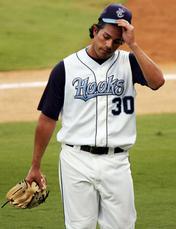 With all the FA rumors and excitement from the beginning of the week dying down a bit, let's shift gears and catch up with the young Astros in Arizona. MLB.com did a feature story on Sergio Perez. It's not ground-breaking in any sense, but if you don't follow the Astros minor leagues all that much during the regular season, this is a decent history of his time on the farm.

MLB.com did a story on me.

Tuesday, 10/28: Drew Sutton went 0/3, and this frightened and confused me. Chris Johnson and Brian Bogusevic began asserting themselves however, going a combined 3/7, with a run scored and an RBI.

Wednesday, 10/29: Mark Ori made an appearance at firstbase and collected an RBI while going 1/4 at the plate. He was kind enough to knock in his buddy Bougy, who also went 1/4. Now, stop me if you've heard this one before- Drew Sutton walks up to the plate...and goes 1/4. His knock was a double, so he gets a gold star from me.

Thursday, 10/30: Our pitchers saw a good deal of action against Mesa, with Sergio Perez starting the game off with four innings of work, giving up three runs (0 ER), walking three and striking one batter out.  Bud Norris decided to take that assertion, and scoff at it- he struck out four, walked none and gave up a run in 1.2 innings of relief. At the dish Drew Sutton got back to his boxscore-filling ways, as he doubled, scored a run, collected an RBI and walked, just for good measure. Chris Johnson lived up to his billing (the billing that I gave him), as he hit a three run, two out homer in the eighth inning. Overall he was 3/4 at the plate, with the other two hits being doubles. All extra-base hits? Not bad, not bad at all. Bougy collected a walk in four AB's.

Friday, 10/31: Maybe it was just a good day. Maybe it was a little Halloween hokus-pokus, but Chris Johnson continued a ridiculous week with another sterling performance. He went 2/3, with another homer and a triple. Yep, that's five straight extra base hits for our young third-baseman. I have to throw a little water on his fire though- he did collect two errors in the game as well. Drew Sutton wanted to keep up appearances, so he collected a couple singles in five AB's. Brad James gave up a hit and walked a batter while giving up an unearned run in the process. 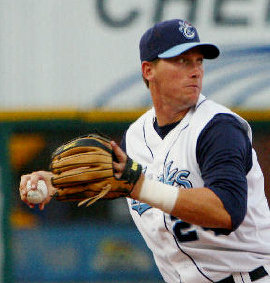 Chris Johnson. Most likely not committing an error in the above photograph.

Saturday, 11/1: All of our Astro batters got started for Scottsdale and combined for a grand total of one hit- a Mark Ori double. Positive signs were shown by Bud Norris though. In two innings of work, he did not allow a baserunner, while again striking out four batters.

Monday, 11/3: A light day, as far as Astros farmhands are concerned. Drew Sutton went 1/5, with an RBI double, and a run. Chris Johnson cooled off getting on base via a walk, but not collecting a hit.

Tuesday, 11/4: Our young guys gave me a chance to end the game updates on a positive note. Bud Norris pitched two more perfect innings while striking out a pair of batters. Bougy was a perfect 4/4 at the plate, with two RBI, two runs and a triple to boot. Drew Sutton went yard for the fifth time this fall, and collected his 17th RBI. Chris Johnson went 0/4. Can't all be good news, I guess. 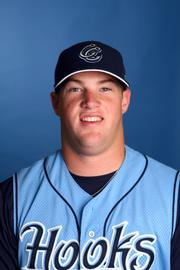 What to take note of from this past week:

Brian Bogusevic was finally able to get on the field consistently and did not dissapoint. For the games (10/28-11/4) that I detailed his line was:

A tidy week's worth of effort, I'd say. I have to emphasize that sample size and competition continue to be a factor in any of these updates, but if we see positives, especially out of someone like Bougy, we should accentuate them while we can. After changing positions, he came into his own in Corpus Christi, OPS'ing 1.003 in 124 ABs. That's not a ton of batter-pitcher interactions to analyze, but it's getting there.

Chris Johnson cooled off in his last two games going 0/7, but in his prior four games he went 7/14 with five XBH, including his first homer of the fall campaign. His line for the past six games looks like this:

Bud Norris gave up one earned run in 5.2 innings for work, giving him 13 innings in the AFL on the whole. His K/BB ratio in his first 7.1 innings of work was a not so hot 4:6, but in his last three outings, Norris has struck out 10 while not walking a single batter. Bravo, sir, bravo. In 80 innings at AA Corpus Christi, Norris showed that he could not only strike out his fair share of batters, but also began to exhibit a decent amount of control:

Caveats? Sure thing. A .346 BABIP in those 80 innings surely helped the cause, and a BB/9 of 3.49 need to be considered as well. Still, a lot of positives should be taken away from his recent performances.