The best Astro in my lifetime

Share All sharing options for: The best Astro in my lifetime

With the doldrums of an offseason that will lack any real interest setting in, I've committed myself to playing around with Astros data to see if the numbers agree with my memories.

Last night and into today, I played around with the numbers in an attempt to answer: who's been the best Astro, offensively, in my life time?  I chose wOBA as the measure of offensive prowess.  For those of you unfamiliar with wOBA, here's brief description and you can click the link for the formula:

Do we really need another statistic? Yes, we do. Instead of trying to take two statistics (OBP, SLG) and combine and correct their flaws in the hopes of getting one number, we prefer to start from scratch...When you look at wOBA numbers...just think OBP, and you’ll be fine. In other words, an average hitter is around 0.340 or so, a great hitter is 0.400 or higher, and a poor hitter would be under 0.300. 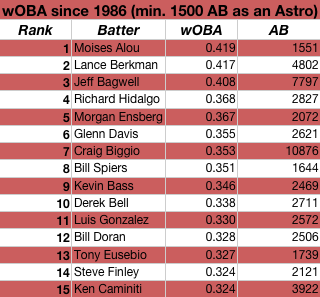 I must admit, I was surprised by the table, but there are some great names listed here.  Congrats Moises. 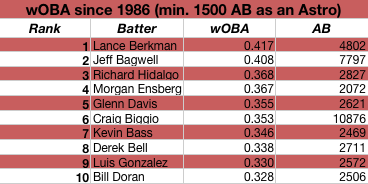 This table coincides a little bit more with my memory than the one above, but I'm shocked at how low Craig is on the list.

So there you have it, either Moises Alou or Lance Berkman have been the most offensively charged Astros bats in my life time.  Thoughts? Reactions?