MLB ERA and HR Leaders of the Last Decade

Share All sharing options for: MLB ERA and HR Leaders of the Last Decade

Recently, at MVN's Statistically Speaking (Stat Speak), Colin Wyers, of the Marcels I posted last week, has a series running entitled, "Building a sabermetricans work bench."  It basically walks you though how to set up a MySQL structured database full of baseball stats, and it has been a godsend for me.

Having played around with some of his example queries, I wanted to see who has been the best pitcher in the last decade, and being fairly uninitiated in culling out deeper data than the basics, I used ERA, and a minimum average of 150 IP/year: 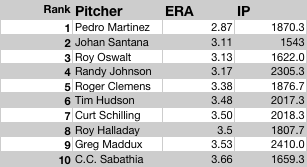 I thought two things when I saw the result:

I'm sure that number two could have never been in existence, but it's fun to think about.
Then I wanted to see who's leading the way in mashing HR in the new millennium (it's an important question because chicks dig the long ball): 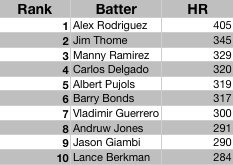 A-Rod is ridiculous and Lance snuck in, beating out Big Pappi by five home runs.  This table also made me think: Do I remember when Andruw Jones was good?
Well, that's all I have for you on Sunday morning, but I hope you found it mildly entertaining.  Any datamining you'd like to see besides these simple ones? Issue me and challenge and I'll get on it over the Thanksgiving break.