Share All sharing options for: 2009 Astros Prediction and why signing Ben Sheets could pay for itself

Over at Lookout Landing, they recently looked at some projections, made some gut corrections and assumptions, and then took at look at how the Mariners would fair 2009, as they stood.  Having given them credit for a pretty novel idea, I've decided to do the same thing.

Looking at ZIPS, Colin Weyers MARCELS, and Bill James' predictions, I got a rough estimate, made my own assumptions and corrections for a few players, and put it all together on a visually pleasing layout of Minute Maid Park.  The image that follows is each player and my projected Wins Above a Replacement Player (WARP) for 2009. 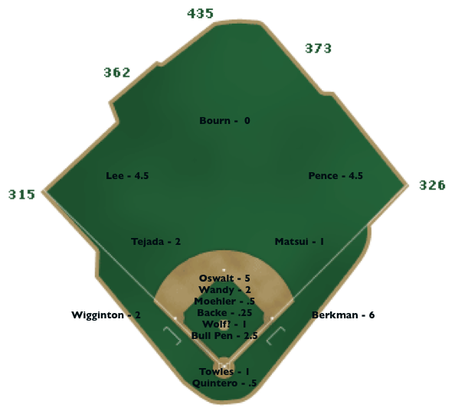 That totals to 32.25 WARP.  Operating under the conventional assumption that a team of replacement level players would win about 30% of their games, my projections see the Astros as a 80.85 win team in 2009 ([32.25+(162*0.3)]) or being .500.  Assuming that our bench could contribute positively, we're looking at maybe another 1-2 WARP, so I'm now going on record as saying the Astros, if they go with this roster (which hopefully we can substitute Randy Wolf for someone better...Ben Sheets), will win 82-83 games next year.  This number of wins is also known as M-E-D-I-O-C-R-I-T-Y.

If Ben Sheets can be a 3.5+ WARP player next year -- and I think he can -- he pushes the projection from 82-83 wins to 84.5-85.5 wins.  That would put our ceiling at 86 wins and borderline at contention for the Wild Card -- possibly.  Throw in some outperformance of our true talent and maybe we do make a legitimate run at the playoffs.

My point in all of this is not to conjecture as to whether we can make it to the playoffs or not, but to make this point: we need either do what it takes to contend or start rebuilding.  Ed Wade's stated plan of attack for this off-season holds us in that awkward middle -- unless he does decide to unload some contracts (in which case, signing Randy Wolf isn't a good idea either).  He and Drayton are justifying this by claiming that payroll considerations are handicapping their desire to truly improve the team.  I'm going to call bull shit on that; I'll also prove it too.

In Baseball Prospectus' Baseball Between the Numbers, Nate Silver runs some regression analysis to determine both a) the value of a win, and b) the value of wins in terms of their added bonus towards obtaining a post-season berth ("Is Alex Rodriguez Overpaid?").  I adjusted his figures for inflation through June 2008 and applied the percentages to each win leading to a playoff berth.  These were the results (sorry, I was to lazy to reconstruct the table, but I'm attaching the spread sheet:  winrevenue): 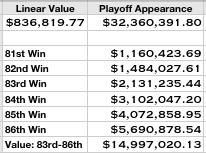 So there you have it, the value of going from the 83rd win (our ceiling without Sheets) to the 86th win is about $15 million dollars.  By all indications, that would actually be below the current market price of Sheets.  In economic terms: Benefits > Costs.

Of course, there is a qualifier to this method: if the Astros don't obtain a post-season berth, then the value of going from the 83rd win to the 86th win is just: $2,510,459.31 (3*Linear Value).  In that instance Costs > Benefits by a pretty large margin.

Thus, the question Drayton McLane and Ed Wade have to ask themselves is: Are they going to risk that cost to make a push for the playoffs while our core group of talent is capable of leading us there? OR Is that risk too great and instead they're going to start trading away talent -- while we still can -- to rebuild? Those are really the only two logical options for this offseason -- it's just up to Ed and Drayton to decide what their risk-seeking preference will be.

Just remember during the rest of the off-season, whenever the payroll consideration for Sheets is brought up, they're basically claiming that they don't think we have a shot at the playoffs.  If that's their line, then their only rational alternative is to admit defeat and start rebuilding.