**UPDATE 9:56 PM** This was announced awhile ago, but I've been away from my computer -- which is really hard for me.  The Astros also sent Doug Brocail an offer today.  I imagine it has to be less than his $3.25 million option so I imagine he'll reject it.  Compensation pick, here we come.

could pull in a three-year deal north of $30MM.

No one could really be that dumb right...right?

Jerry Crasnick has a great piece about where Ben Sheets could wind up in 2009.  He had this to say about the Sheets and the Astros:

People close to Sheets say the Astros rank high on his wish list for several reasons: Sheets enjoys pitching in the National League; he's good friends with Oswalt; and Houston is close to his offseason home [Dallas]. But the Astros might not have the money to pursue him and could opt for a more payroll-friendly alternative, such as Randy Wolf.

This is why we want Randy Wolf to take his ridiculously luck deflated ERA on down the road.  Hopefully the Wizard is working the phone lines from a deer blind somewhere.  Crasnick sees a two year deal in the works, which would be a lot better than the two or three year deal that we're most likely offering Wolf.  The extra expense is probably a marginal $8-10 million dollars over two years.  How do we not make that deal?  Maybe Roy Oswalt will go on strike to protest Ed Wade not making strong efforts to get either of his buds.

The other club Crasnick mentions are: the Rangers, the Mets, the Orioles, the Yankees, and the Dodgers.  The Brewers are also reportedly in talks to help him stay put.

**UPDATE 12:12 PM ** McTaggart is reporting that Ed Wade has made an offer to Wolf in the hopes that he'll accept it before other teams get in on the bidding.  Here's to hoping he declines and tests the water.

So much for the Astros' plan to quickly re-sign free-agent left-hander Randy Wolf. At least a half-dozen teams have expressed interest in Wolf, who went 6-2 with a 3.57 ERA in 12 starts after getting traded from the Padres to the Astros. Wolf, 32, might prefer to return to the West Coast. His past two contracts were one-year deals with the Dodgers and Padres.

Hopefully an arbitration offer is being drafted and Wade is flipping a coin to decide on whether sign a good SP or just start contacting teams to tell them he'll listen to any and every offer for our players.  There could be nothing better for the Astros this off-season than for Randy Wolf to get plucked away by another team that is more idiotic than Ed Wade.  HE'S JUST NOT THAT GOOD. 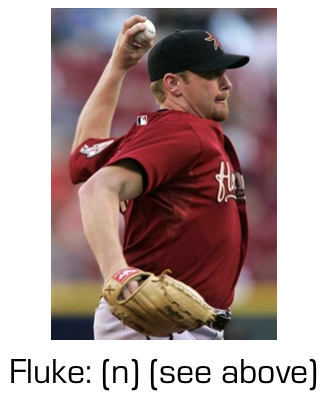 You don't just have to take my word for it: Beyond the Box Score's got my back.