The pitch/fx system is quickly becoming on of the most informative and enlightening tool for both baseball analysts and more traditionally minded scouts.  The system burst on the scene in 2006 and it quickly raised eye brows.  Some of you may remember Joel Zumaya scorching the radar gun on FOX with 101 MPH and 102 MPH -- at the time,  a lot of people called shenanigans on.  The reason for this, is because Sportsvision's pitch/fx system was measuring the velocity of the ball five feet away from the mound, not at the traditional mid-point in its trajectory.

The system works on only two cameras and a whole hosts of technological know how.  There is one camera on the first base line, usually where the press booth closest to home plate is (you can see them on TV every once in awhile if you’re paying attention).  Then there is one directly behind home plate, usually a good ways back in the first row.  These can be spotted at the park, but not so much on TV.  Both cameras take 25 simultaneous pictures of the ball as it is released from the pitcher’s hand to the plate.  Running some algorithms and kinematic formulas, pitch/fx can locate the ball in space and then run a estimated flight of the ball based on the two sets of 25 pictures.  The system measures everything under the sun.  Velocity at each point, acceleration, maximum movement in the x, y, and z planes, total movement x, y, and z, release point, and most importantly: where it crossed the plate.  Those where just the macro categories, there are further detailed measurements taken based on those broad categories -- it takes up 53 columns on a spread sheet.  Some of those categories include, the result of the pitch (ball, strike, called strike, foul ball, HBP) and what happens if a pitch is put in play.  The game state, runners on, the out, pitch count, etc.  Also, using a complicated algorithm, analysts have come up with ways to categorize each pitch, tailored to the pitcher’s known repertoire.  It’s a gold mine.

So what does it have to with the Astros and their change ups?

There have many analysts all providing valuable and insightful commentary and wizardry in working with the data.  While I could turn out an entire paragraph of those who have done great work, today I'm going to focus on one researcher, physicist Josh Kalk.  Kalk runs a free blog that allows you to access and manipulate his pitch/fx database.  While there are imitators, he is currently the only one to implement a correction algorithm to standardize the data -- which makes the fact that he's allowing the world to play around with it for free all the more impressive.

Kalk has done some great work at the Hardball Times in looking at the attributes of each pitch that make it effective utilizing a system known as runs100.  His Anatomy of a Pitch: Change ups, revealed the importance of two attributes of the pitch: speed differential from the fastball and release point similarity to the fastball (i.e. hiding the change up in the fastball).  Armed with that knowledge, lets discover which Astro has the best change up. 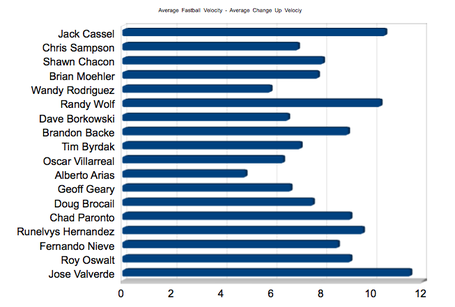 Kalk's study found that the greater the differential between fastball and change up the better the outcome of the pitch.  By that criterion, three pitcher's jump of the chart: Jose Valverde, Jack Cassel, and Rany Wolf.  Some of you might have scoffed at Cassel making the list because his fastball is  pretty slow: 87.7 MPH -- which is actually pretty close to Alberto Arias' 86.0 MPH change up -- but he gets a 10.5 MPH speed differential by averaging 77.2 MPH on his change up.

These three are a cut above the rest in terms of their speed differential, so lets who hides their change up the best.

Tom Brady's back-up's brother has great speed differential, but there are two distinct locations for his change up and fastball, which probably allows hitters to key in on before they get fooled.  Sorry Jack.

This is why Jose Valverde is one of the best pitchers in baseball.  Look at how hidden the change up is inside his fastball.  Not only can hitters not differentiate the release, but they have to battle an 11.5 MPH differential in speed.  Oh yeah, and they've also got to watch out for the splitter too.

Randy and Jose both have great speed differentials and hide the pitch well, which means we have to go extra innings to discover who has the better change up.  The third most important aspect that Kalk revealed in the study was the change up's ability to tail away from an opposite handed hitter.  So we're looking for negative movement for Valverde because he is a RHP and positive movement for Wolf who is a LHP (pitch/fx sets the middle of the plate as 0 and the coordinates are set for RHB).

So there you have it: Randy Wolf has the best change up.  If he departs for greener pastures on the West Coast this off-season (I've got my fingers crossed) then the title will fall to Valverde.  Regardless of his uniform next year, Randy Wolf can rightfully claim the best change up of any Astro in 2008.