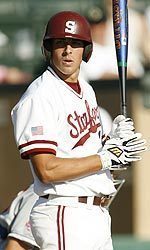 Nearly five months after the Astros selected Jason Castro with the tenth selection the MLB Free Agent Draft, the ex-Stanford Cardinal is beginning to show the promise that he caused Ed Wade and Bobby Heck to draft him higher than most had predicted. Going into the June draft, we knew two things about the Astros' farm system:

Prognosticators at many reputable baseball thinktanks projected Castro to be a second half of the first round selection. Baseball Prospectus had him pegged as heading to Milwaukee with the 16th pick. This had a great deal to do with the scarcity of catchers in this year's draft, and not as much to do with people being overly excited about Castro's skills. He produced good collegiate numbers while a Cardinal, ranking second on the team in both SLG% (.613) and OBP (.429) this past season. Reports immediately after the Astros selected him indicated that not everyone was sold on the backstop from Palo Alto.

The Hardball Times first round draft evaluation indicated that Castro wasn't worthy of being the 10th pick in the draft. The choice to nab Castro had as much to do with signability than it did his skills as a player. The prognosis wasn't great- he was passable, but nothing near what the Astros should have gotten from their first round pick.

Perceptions of minor league players tend to change quickly, and the situation with Castro has been no different. As he was inserted in the lineup for the Astros' A affiliate in Tri City, Castro drew rave reviews as he played well in 39 games in the New York-Penn League. One of the main critiques made of him was that he did not walk enough in college. After walking 22 times in his shortened season, as compared to only 32 strikeouts, Castro headed to Hawaii to play against other top prospects.

As a member of the North Shore Honu, Castro has not disappointed , OPS'ing a tidy .952 in 58 ABs. The power that alluded him while playing for Tri City was discovered in Hawaii, as six of his twenty base hits have gone for extra bases. While many Astros fans were left shaking their heads after his selection in June, Ed Wade and Bobby Heck must be extremely pleased with their choice of Castro thus far.

The next question is- what can we expect from Jason Castro in the future, in terms of offense?. Well, for starters, it will be important to see if he can maintain his high OBP and walk totals throughout the Winter League and on into the minors in 2009. Developing power is a plus, but it's the ability to get on base that I am looking for in a guy like Castro, at least at this stage. Two other stats to keep an eye on, as far as Castro's development are RC/27 and ISO. RC/27 basically is a metric that tells you how many runs a team consisting of all Jason Castros would score in a nine inning game. His total of 5.09 seems to be a solid number, but when compared to the fifth selection in this year's draft, Buster Posey, Castro's success is put into a better context. True, Posey was the National Player of the Year in College Baseball, but Castro was selected only five spots behind Posey. Developing a skill to drive the ball would be tremendous for an Astros club that hasn't seen a catcher with some pop since well...ever. As his ABs continue to climb in Hawaii, his ISO number should improve from a pedestrian .109 in low A ball. This is an important stat to look at when evaluating the performance of a young hitter. Taking away singles from a player's slugging percentage reveals their ability to hit the ball for extra bases. For Castro to truly impress, this stat, almost as much as OBP will fortell what kind of player the Astros chose this year.