Share All sharing options for: Lance Berkman For NL MVP

While the playoffs finally got interesting yesterday (i.e. there won't be a four DS sweeps), HLP and I began to ponder who is deserving of the title of Most Valuable Player for the National League. Discussions we've heard recently primarily center around Albert Pujols or Lance Berkman, so I'm going to limit the discussion of MVP to those two players. In the end, you'll see that it doesn't matter that I ignored the Han Ram's or the Chipper Jones' of the NL.

We began our methodology by looking to several important statistical measures of a player's value: 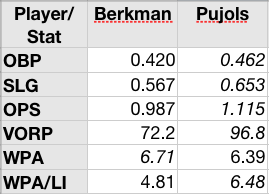 The italicized categories are the categories in which a either player has the advantage. Just a quick glance at the table suggests that Pujols is clearly the dominant player this season. However, in terms of being the most valuable player in the National League, he's just not.

Why? You ask. Just keep reading.

Also, read the whole post before you vote in the poll. I may just be convincing enough to change a few minds.

Lance lost out in OBP, SLG, OPS (of course), VORP, and WPA/LI. For those of you unfamiliar with VORP or WPA and LI, I'll give you a brief overview.

VORP is a proprietary statistic of Baseball Prospectus which measures a players total offensive contribution above a theoretical replacement level at that position. It's measured in runs. So the better the player, the more runs they provide over the replacement level.

WPA (win probability added): WPA is the difference in win expectancy (WE) between the start of the play and the end of the play. That difference is then credited/debited to the batter and the pitcher. Over the course of the season, each players’ WPA for individual plays is added up to get his season total WPA.

Hopefully the large block quote from Fangraphs gets the point across. For those of you unfamiliar with WE, it's the probability a team will win the game given the game state, the run environment, etc. So it's measuring how many wins a player adds through every action of his during a game.

LI is a measure of how many runs a run is worth, given the game state and the run environment, compared to what a run is worth at the start of a game, when each team has a 50/50 shot of winning a game. In late innings or tight games, due to leverage, the value of a single run could be worth 3 times the value of a first-inning lead-off home run. Thus, WPA/LI is a measure that neutralizes the leverage factor from the WPA. This is done to discount for clutchness or the luck of being able to enter a game state that affords such high leverage opportunity.

At this point, you have to be wondering how it is that Berkman could possibly be considered the NL MVP. Well, it's quite simple. Lance Berkman added more wins to the Astros than any other player did for any other team in the National League. Sure, he was helped out by the fact that he often found himself in a tight situations that allowed him to really add to his WPA total, but the fact of the matter is, when his team needed him, he clearly came through for them. Albert Pujols on the other hand, was just a tad worse than normal when it came to game changing situations for his team.

So why would we reward Pujols for failing his team in tight situations and punish Lance for coming through time and time again when the AB or the diving stop at first mattered the most? I can't think of a good reason. If the aim of rewarding someone as the NL MVP is to say that this player was the most valuable player throughout the course of a season, the only statistic which I feel adequately captures this is WPA. It is the only measure which captures the direct effect a player had on his team and it clearly indicates that Lance Berkman, is the only man deserving to walk away as your 2008 National League MVP.