Share All sharing options for: Drayton McLane v. Bud Selig: Who is the Astros' 2008 Scape Goat 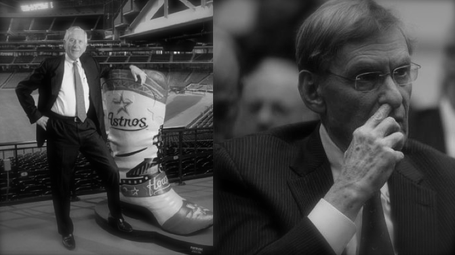 The other day I threw out a list of possible candidates for our scape goat in 2008 and there emerged only two clear favorites: Drayton McLane (10 votes) and Bud Selig (13 votes).* Since you, the readers, have spoken and elected two great candidates to be the person we focus our angst from the 2008 season on, it's now up to you do make the final decision. Do we blame Drayton McLane who pinched pennies on the farm system and who refused to stand up to Selig to not have our Ike games made up at the end of the season? Or do we blame Bud Selig, the man who saw neutrality in a 90 minute drive from Chicago to Miller Park?

*Tally at time of publishing