At this point, Brandon Backe and his dust-up with the Galveston Police Department is well known. The full details of the event have not been disclosed, nor will they be until the Backe’s grievances are heard in court, if the matter even proceeds that far. The decision by seven members of the wedding party (including Backe) to file a counterclaim against Galveston police alleging civil rights violations is a much bigger issue to tackle than the misdemeanors charges of resisting arrest and inferring with a police officer. 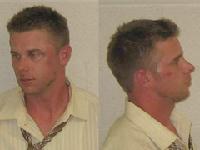 Backe went down, down in an earlier round.

Speculation is rampant as to whether or not he went down swingin'.

What is almost certain is that for starters, there will be a lot of he said/she said. At some point, if not already, the police officer(s) involved in making the arrests will sign an affidavit that will record the events as he/she saw them that evening. The affidavit(s) can be used in a potential trial, in lieu of actual sworn testimony. On the other hand, Backe will have his own story to tell, and will have the same opportunity as the police to enter into evidence his recollections of the night’s events. The City of Galveston may take aim at the potential affidavits of Backe. It could assert that those making the statements are not experts, and that the affidavit contains legal conclusions that lay-men are not qualified to reach. It is not enough to mention conclusions of law (assertions of wrong doing by police) in an affidavit, rather, it is necessary to assert an issue of fact (an identifiable difference in the events as compared with your opponents recollections) for the proceeding to continue past this initial stage. For instance, in City of Harlingen v. Vega, (951 S.W.2d 25,Tex.App.-Corpus Christi,1997), the Court found that, "the woman asserting claims attested to precise and graphic facts surrounding her arrest. She does not suggest that she merely "thinks" those facts lead to her injuries." This is the sort of first hand proof that is necessary to contradict the testimony/affidavit of a police officer.

Regarding the actual charges asserted, civil rights violations are not taken lightly. The Fourth (protection against unreasonable searches and seizures), Fifth (guarantee of due process) , and Fourteenth (equal protection under the laws) Amendments are three sources of our civil rights as both Texans and Americans. In federal statutory law, one of the more prevalent claims arrested against police officers is made under 42 U.S.C.A § 1983. It reads (pertinent parts in bold):

Every person who, under color of any statute, ordinance, regulation, custom, or usage, of any State or Territory or the District of Columbia, subjects, or causes to be subjected, any citizen of the United States or other person within the jurisdiction thereof to the deprivation of any rights, privileges, or immunities secured by the Constitution and laws, shall be liable to the party injured in an action at law, suit in equity, or other proper proceeding for redress, except that in any action brought against a judicial officer for an act or omission taken in such officer's judicial capacity, injunctive relief shall not be granted unless a declaratory decree was violated or declaratory relief was unavailable. For the purposes of this section, any Act of Congress applicable exclusively to the District of Columbia shall be considered to be a statute of the District of Columbia.

In terms of state law (again, this a somewhat educated guess on my part), Backe and his co-complainants may assert a variety of charges against the police officers, including assault, battery, negligence or any other common tort. A defense that the police may counter with would be to claim official immunity as police officers. Basically, if it comes out that the police did act improperly, their actions can be excused if this defense is deemed sufficient by the finder of facts (a judge or jury). It hinges on whether or not the officers in question had the reasonable belief that their actions against Backe and others were necessary to perform their duty as police officers.

There is also a state statute that protects police officers from tort claims that arise from emergency situations, so long as the officer does not act with a conscious indifference (basically recklessness) to the well being of others. In a federal civil rights action under § 1983 (the statute I quoted earlier), the Supreme Court has declared that immunity or "good faith" defenses are not allowed. Owen v. City of Independence, Missouri, 455 U.S. 622 (1980).

The City of Galveston could conceivably be held liable as well, since the immunity defenses that may be asserted by the police officers is only applicable to a person, not a city. Alberti v. Sheriff of Harris County, 978 F. 2d 893, 895 (5th Cir. 1992).

Ultimately, it boils down to whether or not the police acted reasonably. Did they use excessive force in arresting Backe? Did the actions of police contravene the Fourth Amendment’s protection against unreasonable seizures? To prevail, Backe may have to show that: (1) a significant injury, which (2) resulted directly and only from the use of force that was clearly excessive to the need, and the excessiveness of which was (3) objectively unreasonable. Can the officers prove that their actions were objectively reasonable? Or can Backe prove otherwise? Any potential litigation may hinge on this question.

This is my second year law student interpretation of Brandon Backe’s legal troubles. I’m no expert, but this analysis was one that I wanted to make, so that some of the relevant issues, laws and procedure could be brought to everyone’s attention.