Peavy Worth It For the Astros?

Share All sharing options for: Peavy Worth It For the Astros?

I've remained pretty ambivalent about the Peavy trade rumors, because I've assumed it was a non-story for the Astros, which I hope it is.  However, today Jake Peavy stated that Astros would be at the top of his list to be traded to because Roy Oswalt had been lobbying him hard.  It generated some buzz on the trade related blogs, so I figured I'd address the issue.

We all know that Jake Peavy is one of the best pitchers in the game, but I got to thinking about whether or not Peavy would even be worth what it would take to land him in a trade.

My methodology was pretty simple.  I took players I thought would be likely candidates for the trade (the Padres have made it know they want at least two MLB ready starters) WARP's from Baseball Prospectus' PECOTA, and then subtracted it from Peavy's WARP for the duration of his contract. I put together two packages, one with Hunter Pence and one without it.  For every player included, I assume that after they attain free agency they walk, which makes since because Peavy's contract is structured as follows (according to Cots Contracts):

Package One: Wandy, Paulino, Bourn, Chris Johnson and one of our draft picks from this year.  I had to fudge the numbers on Johnson because he has no PECOTA card and I didn't include any WARPs for a potential draft pick because it'd just be ridiculous for me to guess and they probably wouldn't show up in the bigs until much later in Peavy's contract. 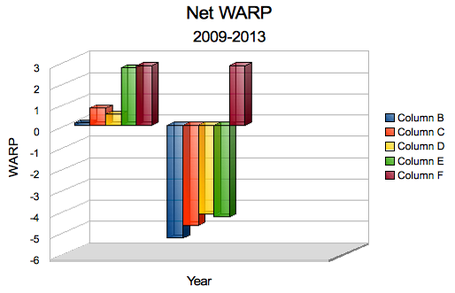 Because I couldn't figure out how to edit the column names in Calc, Column B is 2009 through Column F which is 2013.

I think the graph says it pretty well: Trading for Jake Peavy does not have a lot of upside or even make sense for the Astros -- especially if Hunter Pence is involved.  So to answer to title of the post is: NO.